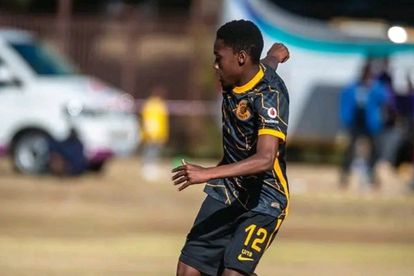 Kaizer Chiefs wonderkid Mfundo Vilakazi scored at the Engen Knockout Challenge to help his side beat Black Aces in the quarter-finals.

The left-footer was included in the Chiefs U19 squad for the Gauteng tournament, barely six months after joining the team from Doornkop Students.

And Vilakazi, wearing the No.12 jersey, didn’t disappoint despite being one of the youngest players at the Engen Knockout Challenge as he scored Amakhosi’s first goal in the 2-0 win on Saturday.

Consequently, Chiefs reached the semi-finals of this year’s Engen Knockout Challenge where they will play Mamelodi Sundowns on Sunday.

It was in January when Vilakazi arrived at Chiefs on the back of taking South Africa by storm at the Phyllis Games with Doornkop Students.

And on 23 January while playing for the Chiefs DStv Diski Challenge (DDC) team, Vilakazi netted his first goal on debut.

He was in and out of Vela Khumalo’s team throughout the second half of the Diski Challenge season as he was also taking part in the Gauteng Development League (GDL) as part of his development.

Now, with his performance and this goal against Black Aces, Vilakazi’s fans will expect to see him regularly in the Diski Challenge next season, and possibly in the Chiefs first team in the near future.