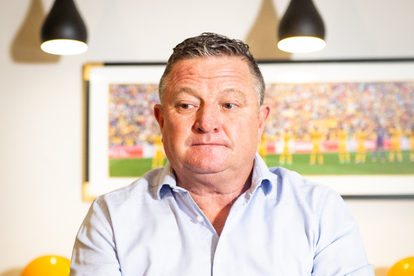 Gavin Hunt believes that Daine Klate will do a good job at Chippa United as long as he can “learn on his feet”. Image: @KaizerChiefs / Twitter

Gavin Hunt believes that Daine Klate will do a good job at Chippa United as long as he can “learn on his feet”. Image: @KaizerChiefs / Twitter

Gavin Hunt has just returned from a stint in England with Manchester City. Now, he’s back in SA and being touted for a SHOCK return.

Hunt was recently mentioned as a ‘possible replacement’ for Highlanders FC.

They have just axed Mandla ‘Lulu’ Mpofu with management listing Hunt as a potential replacement, according to Nehanda Radio.

This would be a shocker of note! Given the magnitude of Hunt’s name.

He has coached Bidvest Wits and Kaizer Chiefs in the DStv Premiership.

“Gavin Hunt for Bosso? Highlanders are set to appoint Hunt as the new Head Coach of the Bulawayo giants in the next few days as talks are at an advanced stage,” wrote veteran journalist Ezra Tshisa Sibanda.

He wrote this on Highlanders FC’s official Facebook page.

Highlanders only won three games all season (out of 14). Hunt could certainly turn this around but he is more likely to coach a PSL side then to move across the border to Zimbabwe.

His family is here and there are several sides who could do with his services right now. The Soweto giants, Kaizer Chiefs and Orlando Pirates currently have interim coaches while SuperSport United and AmaZulu are yet to confirm their new head coaches.