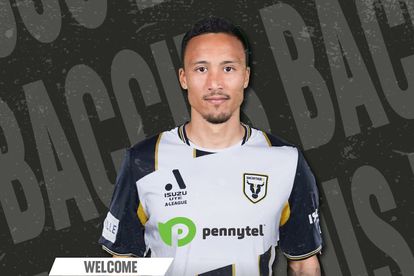 Baccus was among a host of players to have their contracts not renewed by Kaizer Chiefs recently. Other players packing their bags were Samir Nurkovic, Leonardo Castro, Lebogang Manyama, Lazarous Kambole, Daniel Akpeyi, Daniel Cardoso and Dumisani Zumu, while Anthony Akumu Agay has been transfer-listed by the club.

It’s now been confirmed that Baccus has signed a two-year deal Macarthur FC in Australia; a team coached by Man United legend Dwight Yorke, who was recently appointed as the club’s head coach.

“I’m excited to be here and start a new challenge with this club. I’m from this area, so I’m looking forward to being back here and getting start with the new coaches and my new teammates,” Baccus said on his arrival at the Bulls.

“With the new appointment of Dwight to the club, I think it’s an exciting time for the club and for us players learn from his experience at such a high level. I think the team is moulding to be a great one and I believe if we work together, we will do really well in the competition,” he added.

Meanwhile, Cardoso has reportedly agreed to a three-year deal to join Sekhukhune, with an announcement expected in the coming days.

It will now be interesting to see when Cardoso could join this new group of players.

Chiefs have undergone significant team changes in the ‘off-season’