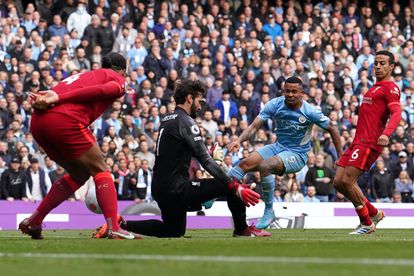 Manchester City and Liverpool meet again this weekend as they battle for a place in the FA Cup final at Wembley on Saturday 15 April.

Click here if the live scores do not load

These sides have met twice before at Wembley stadium, with both games ending in a 1-1 draw before going to penalties. City eventually emerged victorious on both occasions in 2016 (League Cup final) and 2019 (Community Shield).

This is the first FA Cup meeting between Manchester City and Liverpool since 2003 when Gérard Houllier’s side ran out 1-0 victors away from home over Kevin Keegan’s charges, with Danny Murphy netting the winner.

The Manchester City vs Liverpool tie will be the first FA Cup meeting between teams in the top-two of the Premier League on the day of the game since the 2016-17 semi-final between Chelsea and Tottenham Hotspur.

Following their Premier League clash last weekend, Liverpool and City will meet twice in the space of a week for the first time since April 2018.

Manchester City are appearing in their fifth FA Cup semi-final in the last six years.

Liverpool have progressed from eight of their last ten FA Cup semi-final ties.

Throughout their managerial careers, neither City’s Pep Guardiola nor Liverpool’s Jürgen Klopp have lost more often against any other manager than they have against each other. In domestic cup competition, they have one win apiece against each other, with Guardiola’s Bayern Munich beating Klopp’s Borussia Dortmund 2-0 in the 2014 DFB-Pokal final, and Klopp returning the favour in the 2014-15 semi-final (2-0 on penalties after a 1-1 draw).