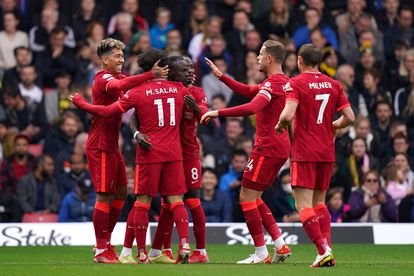 Sadio Mane says that he is not surprised by the form of Liverpool teammate Mohamed Salah.

Speaking shortly after Liverpool’s dominant 5-0 win over Watford, Mane said it was only outsiders who didn’t expect great things from Salah.

Salah laid on a sublime pass that set Mane up for his opening goal, also his 100th in the Premier League, before scoring an incredible solo effort for Liverpool’s fourth.

The Egyptian’s performance once again drew great praise even with Bobby Firmino netting a hat-trick on the day.

“Of course, I think it is you guys who are surprised – but not me because we all know his quality,” Mane said.

“We know how he can move the ball, he showed it against Manchester City, which was another great goal, so for him to score goals like this is normal.

“It was a very wonderful goal and I am very happy for him.”

Mane says he has put the problems of last season behind him and hopes to be part of a Liverpool push for the highest honours.

“I said from the beginning now that it can be a different season for all of us and you can see that.

“So hopefully we are going to go for the titles, which is our dream, that’s what we are looking at and what we are working for.”

Liverpool to keep on attacking

The Liverpool front three were firing on all cylinders against Watford and Mane hopes they continue this rich run of form.

“I think we started very well, played really well, created many chances and scored five goals. We deserved to win.

“I’ve always said it’s very easy to play up front with these two guys. They are two of the best players in the world and I think we cause defences many problems.

“I think by moving quick, dropping deep, making runs and that makes the difference. Hopefully we are going to keep going like this and score as many goals as we can for the team until the end of the season.”