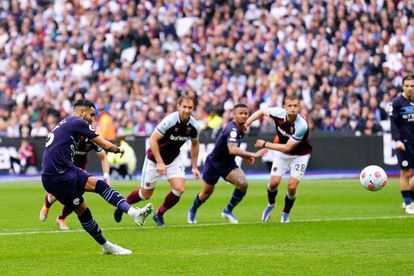 Manchester City would have had one hand firmly on the Premier League trophy had they completed the comeback from 2-0 down at half time.

While City still have their fate in their own hands, if Liverpool win against Southampton midweek it would set up an exhilarating final day of action.

Pep Guardiola was without Ruben Dias, John Stones and Kyle Walker and his makeshift defence was cut apart on the counter in the first half with Jarrod Bowen netting twice.

While Jack Grealish has failed to live up to his £100 million price tag, he came up with his biggest Manchester City goal four minutes into the second period to get the comeback started.

Manchester City had a little rub of the green on their side to get level when Vladimir Coufal turned Riyad Mahrez’s free-kick into his own net.

The result has the benefit of all but ruling out the season being decided by goal difference unless City lose on the final day and Liverpool conspires to draw.

“Now there is no debate about goal difference, just win our game and we will be champions,” said Guardiola after the match.

“Our stadium will be sold out and we will give all our lives to do it. It’s an incredible chance to win one game to be champions.”

Manchester City will finish their season at home to Aston Villa, with faced familiar to Liverpool both in their team and their dugout.