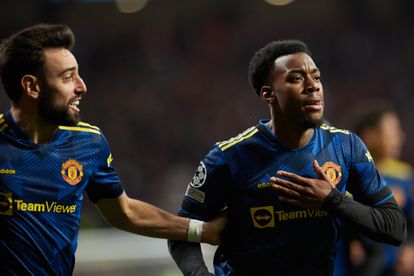 Ralf Rangnick wants Manchester United to play with the same attitude as Anthony Elanga after the 19-year-old salvaged a 1-1 draw against Atletico Madrid on Wednesday.

Elanga came off the bench in the 75th minute and scored in the 80th to ensure they go into their home leg all square.

Atletico had clearly dominated the majority of their Champions League last 16 first leg at the Wanda Metropolitano. They only had a single seventh-minute goal to show for their efforts, however.

The draw unquestionably felt like a victory for United. They were poor in the first half, however, escaped with a result that puts them in a strong position to reach the quarter-finals.

“In all the games he has played, he shows he is playing with passion and fun,” Rangnick said after the match.

“He is just enjoying himself on the pitch, he is aware of his weapons and he wants to show his weapons.

“Not just with the goal he scored, he had three or four great runs. Atletico had problems with this approach. We have to show this in other positions as well, one or two other players, in every single position. If we want to go through we have to play like that.”

Rangnick’s side had failed to have a single touch in the Atletico penalty area in the first 45 minutes of the tie.

“After the performance in the first half, it could only get better,” Rangnick told BT Sport.

“What we played in the first half I still cannot believe. We played without conviction, without aggression and that is why we were struggling.

“In the second half we did better. With more possession in areas that mattered and if we played another 10 minutes we might have won the game. We have to play better in the first half, I was very disappointed by that performance in the first half.”

The Manchester United boss was asked what he told the players at half-time.

“I told them this is not enough,” he clearly said.

“We have to have more energy. It’s not about game-plans or tactics. It’s about conviction.

He also added: It’s about belief. This is not enough. This is the Champions League.”

In the critical moment, Elanga raced onto Bruno Fernandes’ through ball, skipped away from a challenge and slid his finish into the far corner.

“I think it was my first touch as well,” Elanga said.

“I have dreamt of moments like this, scoring in the Champions League against top European teams like Atletico Madrid, it’s a dream come true.

Elanga also said: “It is only the first half of the tie, we have to be ready for the second half at Old Trafford.”