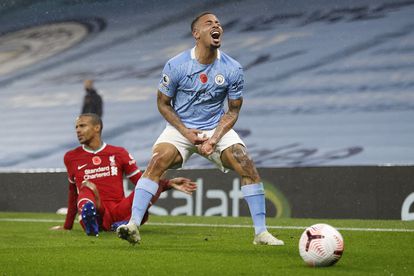 Man City and Liverpool played to an entertaining 1-1 draw in the last of Sunday’s English Premier League (EPL) matches,

In what was the weekend’s blockbuster fixture, more chances were left on the field than were converted, with both sides squandering opportunities in the pouring rain at The Etihad.

However, the first real chance of the encounter was duly converted into a goal by Mohamed Salah, who stepped up in the 13th minute after Liverpool were awarded a penalty.

Next to get an opportunity at goal was City forward, Raheem Sterling, who was denied by Alisson Becker in the 25th minute.

The hosts did not have to wait to long for the equaliser though, as Gabriel Jesus drew level just six minutes later after skinning Matip and finishing past Becker.

Another chance fell to City when the referee pointed to the spot once more.

Kevin de Bruyne stepped up, but pulled his shot wide with the keeper well beaten.

Almost immediately, there was another close call at the other end, where Ederson pulled off a double save to deny Trent Alexander-Arnold and Diego Jota.

Jesus could have made it 2-1 to City ten minutes into the second half after heading towards goal unmarked, but his effort went wide of the target.

There were not as many chances in the second half, which was way more subdued compared to the first, as the two sides settled for a share of the spoils in the end.

FULL TIME | The points are shared at the Etihad…

The result sees Liverpool leapfrogging Southampton in the standings – going up to third place – while City’s stuttering season continues as they go up to 11th ahead of West Ham.

Both teams get a week-long break as the international break takes centre stage in the coming days.