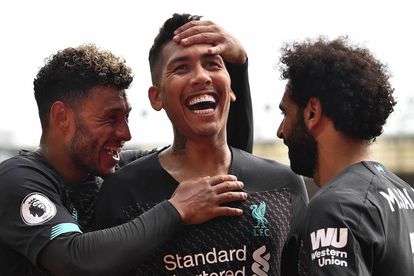 Early Premier League leaders Liverpool and Arsenal face-off at Anfield on Saturday where one of the only two remaining 100 percent records in the Premier League will go.

The European champions will hope to continue a fine recent record against the north Londoners.

Jurgen Klopp has never lost in seven previous Premier League meetings against Arsenal and his side have beaten the Gunners 4-0 and 5-1 at home in the past two seasons.

However, Unai Emery’s outfit are hoping a busy summer in the transfer window, while Liverpool did not strengthen, will have significantly narrowed the 27-point gap between the sides last season.

This can  be seen as an early opportunity for veteran centre-back David Luiz to make his mark by halting the free-scoring trio of Sadio Mane, Roberto Firmino and Mohamed Salah, who combined for all five Liverpool goals when the sides last met.

The Gunners  have some outstanding finishers of their own. Pierre-Emerick Aubameyang, who shared the Premier League Golden Boot with Mane and Salah last season, has scored his side’s winner in the first two games of the campaign