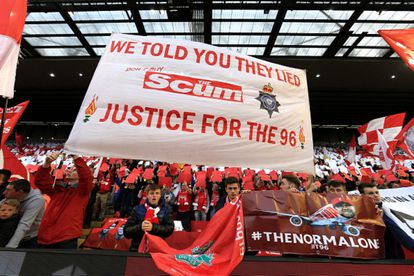 Liverpool fans, those who live in the metropolis or are affiliated with either the club or the city have boycotted the Sun since shortly after the Hillsborough Stadium tragedy in 1989.

The Sun has attracted more than its fair share of controversy since it was acquired by Rupert Murdoch in 1969. The paper has been repeatedly accused of fabricating stories as well as stoking the fires of racism and xenophobia.

At best, the Sun is a trashy tabloid while the worst accusations put them at the very heart of the fake news epidemic. Still, there are many similar publications that are not nearly so reviled in Liverpool, where many will not even say the name of the broadsheet or refer to it as ‘The Scum’.

Hillsborough and the beginning of The Sun boycott

The paper earned the ire of Liverpool residents and those associated with the club and city for their reporting on the Hillsborough Stadium disaster.

Four days after the stadium crush killed 96 people in attendance and saw many more seriously injured the Sun ran a front-page piece on the incident ironically titled ‘The Truth’ which accused Liverpool fans of not only causing the incident, but hindering the emergency services from helping the injured and even pick-pocketing the dead.

The Sun parroted members of the police and conservative MP’s views on the incident without attempting to confirm the voracity of the explosive claims.

In 1990, the Taylor Report concluded that all accusations of drunkenness and violent behaviour from Liverpool fans were unfounded, stating that most fans were: “not drunk, nor even the worse for drink”.

Kelvin MacKenzie, who was the editor of the publication at the time of the incident apologised for the coverage in 1993, however in 2006, he went back on his apology, being quoted at a private business lunch that he had only apologised because newspaper owner Rupert Murdoch had made him and adding: “I was not sorry then and I’m not sorry now.”

After the 2012 Hillsborough Inquiry report was published, MacKenzie apologised again.

“It has taken more than two decades, 400,000 documents and a two-year inquiry to discover to my horror that it would have been far more accurate had I written the headline The Lies rather than The Truth. I published in good faith and I am sorry that it was so wrong.”

Liverpool fans and the club itself have rejected the apologies and in 2017, the club barred journalists from The Sun from entering the designated press areas of the stadium or attending press conferences.

The boycott led to a dramatic drop in the paper’s circulation within the city of Liverpool, numbers which have never recovered.

The Sun are rightly reviled as a symbol of everything that is wrong with tabloid journalism, and Liverpool fans are not alone in expressing their disgust for the antics of the Rupert Murdoch mouthpiece.

In 2020, the paper apologised for running a story on Paul Pogba quitting the French national team, which proved to be entirely false. The fact that the apology included an attempt to pass the blame onto other publications did not curry a great deal of favour with their detractors.

It seems inevitable that the enmity between Liverpool and The Sun will continue until one of the two ceases to be.