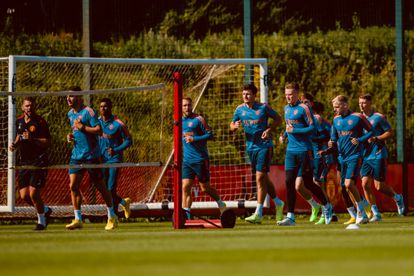 Manchester United’s start to the Premier League season has been utterly abysmal and they face Liverpool next! Photo: Twitter @ManUtd

Manchester United’s start to the Premier League season has been utterly abysmal and they face Liverpool next! Photo: Twitter @ManUtd

Manchester United’s start to the Premier League season has been utterly abysmal, with two shock losses meaning they’re bottom of the table for the first time since the inaugural season, while Erik ten Hag became the first Manchester United manager to start his tenure with two defeats in over a century!

Add to that a lacklustre transfer window, Cristiano Ronaldo’s transfer saga, and protests against the owners, and the Theatre of Dreams sounds more like a field of landmines!

The Red Devils could compile more notorious records as they face old foes Liverpool, considering they’re at risk of losing their first three league games for only the fourth time in their illustrious history.

But home is where the heart is, and given Manchester United’s opening day loss to Brighton ended a nine-game Premier League unbeaten streak (W5, D4), they’ll be looking to lean on whatever fortifying magic Old Trafford can still muster.

Liverpool have experienced a poor start to the campaign by their own standards, with back-to-back draws serving as a reality check for the title hopefuls.

Manager Jürgen Klopp has his own headaches with a mounting injury list, a suspended Darwin Núñez, and seeing his side concede first in their previous six Premier League matches, potentially showing their famous intensity may be producing some negative drawbacks.

This game is almost already a must-win for Liverpool if they’re to avoid leaving themselves a mountain to climb in the title race, but there’s more at stake than just the three points.

Never before have Liverpool claimed three successive league victories at Old Trafford, and having lost just one Premier League head-to-head in the last 12 (W5, D6), and winning the last two here by at least two goals, the Reds will be looking to put their Red Devil rivals to the sword.

Manchester United’s Bruno Fernandes will be looking to add to his two goals in his last four appearances against Liverpool, whilst Mohamed Salah is one goal away from becoming the first Liverpool player to score ten times against United, with six of those coming at Old Trafford!

Manchester United didn’t win any of their games last season when starting as the betting outsider (D3, L6).