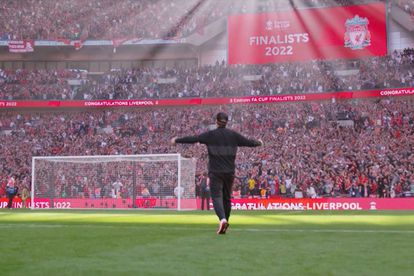 Title-chasers Liverpool welcome struggling Manchester United to Anfield on Tuesday in what promises to be a cracking Premier League clash. Photo: Twitter @watch_LFC

Title-chasers Liverpool welcome struggling Manchester United to Anfield on Tuesday in what promises to be a cracking Premier League clash. Photo: Twitter @watch_LFC

With the Premier League title, UEFA Champions League, and FA Cup to chase, every game will feel like a final for Liverpool from now on, with a historic quadruple still a possibility.

An undefeated league start to 2022 has dragged them back into this title race (W10, D2 – including eight clean sheets), and their 32-point haul is unsurprisingly the Premier League’s best since the turn of the year.

Now a clash against old foes Manchester United – who Liverpool are unbeaten against in seven Premier League head-to-heads (W4, D3) – could take them one step closer to top-flight glory.

That’s been a big reason why they’ve been so dominant on Merseyside, winning their last 10 Premier League matches at Anfield while outscoring their opponents 29-2 during that time.

All of that acts as the ideal preparation to welcome rivals Manchester United, aware a victory would not only hand Liverpool the bragging rights, but also see them end the day as Premier League leaders for the first time since 1 October 2021.

Manchester United’s uncomfortable 3-2 win over Norwich would have done little to alleviate some fans’ frustrations as pre-match protests towards the club’s owners overshadowed that victory.

Only once before have the Red Devils had fewer points after 32 Premier League games than their current tally of 54 points (52 – 2019/20), therefore a strong end to the season will be needed to get fans back on side.

It’s hard to see how that upturn starts here at Anfield based on the form of both sides, particularly with Ralf Rangnick’s men having suffered defeat in each of their last two league road trips.

After their 5-0 drubbing in October’s reverse fixture, revenge might give United the motivation they need to pull off a shock win and finally end a winless five-game Premier League away run against Jürgen Klopp’s men (D3, L2) which stretches back to January 2016.

Although he’s without a goal in eight appearances, Mohamed Salah tends to come alive in this fixture for Liverpool with eight goal contributions (G7, A1) across his last five head-to-head matches. Meanwhile, United will look to Bruno Fernandes to make some magic after he scored three of his last four Premier League games on the road.

Ten of Liverpool’s 12 home Premier League wins this season have come by a 2+ goal margin, the most wins by that nature across Europe’s top-five leagues (tied with PSG).

‘He is up to the task’: Ramaphosa backs Lesufi as Gauteng Premier