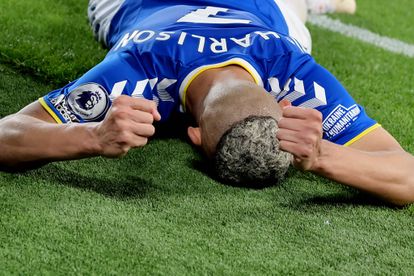 Everton secured Premier League survival thanks to a thrilling second half comeback from 2-0 down to beat Crystal Palace 3-2 in front of a cacophonous Goodison Park crowd.

Crystal Palace manager Patrick Vieira kicked out at a fan as supporters spilled onto the pitch in celebration twice after Dominic Calvert-Lewin’s winning goal five minutes from time and in chaotic scenes after the final whistle.

Vieira refused to comment on the incident that came as he was surrounded by Everton fans on his way back to the visitors’ dressing room.

Only victory was good enough for Everton to not be fretting over their 68-year stay in the English top flight going into the final day of the campaign on Sunday.

But a series of calamitous defensive errors looked set to cost Frank Lampard’s men as goals from Jean-Philippe Mateta and Jordan Ayew put Palace in command before the break.

Michael Keane sparked the fightback nine minutes into the second half before Richarlison levelled 15 minutes from time.

Calvert-Lewin’s injury problems have been a major source of Everton’s struggles this season but the England international came up with a huge goal when his club needed it most as he met Demarai Gray’s free-kick flush with a diving header.

“Anyone on the outside world would say we were dead and buried at half-time but the character of this club dragged us through,” said Lampard.

“The spirit was immense. I am overwhelmed.”

The battle to avoid joining Norwich and Watford in the Championship next season is now between Burnley and Leeds heading into the final day.

The Everton bus arrived to a wave of noise and flurry of blue flare smoke, but the intense atmosphere quickly turned to frustration.

Conceding from set-pieces has been a consistent failing all season for Everton under two different managers.

They were undone again from a free-kick for the opener as Eberechi Eze’s delivery was headed in at the back post by the unmarked Mateta.

Everton had a case that Jordan Ayew should have been sent-off midway through the first half for a wild lunge on Anthony Gordon.

But the home side’s anger turned to anguish as a catalogue of errors led to Palace’s second.

Jordon Pickford needlessly flapped at a cross and when Wilfried Zaha fired a bouncing ball goalwards, Ayew was gifted two chances to bundle the ball over the line despite the presence of two defenders in the six-yard box.

Everton were given hope when centre-backs Mason Holgate and Keane combined for the former Burnley man to fire brilliantly into the far corner.

Pickford then made amends for his earlier mistake by producing a vital save to prevent Mateta restoring Palace’s two-goal advantage.

That proved a vital turning point as Richarlison, who has so often rode to his side’s rescue in recent weeks, did so again by firing a loose ball into the far corner.

Calvert-Lewin’s winner sparked even more madness among the crowd as the game was held up due to the pitch invasion.

Seven minutes of nervy stoppage time followed, but Everton held out and the supporters spilled back onto the pitch in even greater numbers at full-time.

Vieira could now face an FA charge, but there will be some sympathy for the Frenchman in the latest case of a rise of dangerous pitch invasions.

Daily devotion: Your bible verse and prayer for 21 July 2022

81-year-old among seven charged with fraud and corruption