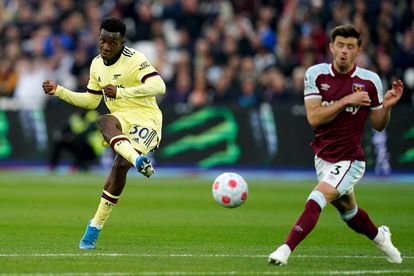 Arsenal’s Eddie Nketiah has a shot on goal during the Premier League match at the London Stadium. Picture date: Sunday May 1, 2022. Photo: EPA via Backpagepix

Arsenal’s Eddie Nketiah has a shot on goal during the Premier League match at the London Stadium. Picture date: Sunday May 1, 2022. Photo: EPA via Backpagepix

The English Premier League is closing in its business end with little certainty anywhere in the top four and Sunday was a big day for Arsenal.

Liverpool and Manchester City kept up their winning ways on Saturday and their title battle is set to go down to the wire.

Chelsea have long since dropped out of the title race, but another loss for Thomas Tuchel’s side on Sunday threatens to pull them into a scrap with their London rivals.

Spurs’ regenesis under Antonio Conte has seen them enter the Champions League race.

Manchester United meanwhile would need a great deal of misfortune to befall both Arsenal and Spurs but they remain mathematically in the race for the Champions League.

Arsenal’s victory over West Ham snuffed out the Hammers’ faint hopes of reaching the Champions League, leaving them to duel with Wolves for the Europa Conference League spot.

Spurs had earlier beaten Leicester 3-1 thanks to a Son Heung-min double to move into fourth for a few hours.

“No-one could have imagined when I arrived in November we could be in this race still, but these players are deserving to fight for such an important place,” Conte told the BBC.

“It is not easy to qualify for the Champions League in England.”

Chelsea’s future is gravely uncertain due to matters off the field and on it, their season has taken a sharp downturn in recent months.

Everton’s victory over Chelsea at Goodison Park moved the Toffees to within two points of safety and gave embattled manager Frank Lampard a lift.

The former Chelsea star and manager failed to meet expectations at Stamford Bridge and desperately needs his rescue mission on Merseyside to be a success for the sake of his managerial reputation.

Lampard was optimistic that the result was the first step to making Goodison a fortress again.

“The fans are in the middle of this,” he told Sky Sports. “I am pleased the players could see on the way in what it means to the fans.

“They know that and understand it. They got behind us, were nicely aggressive — this place has to be a hard place to come.”