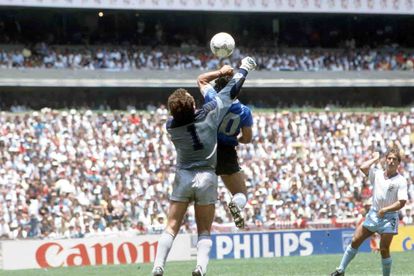 Diego Maradona’s eldest daughter claims that the Argentina shirt being auctioned is not the one her late father wore when he scored the infamous “Hand of God” goal against England.

Dalma Maradona said the shirt was actually worn by her father during the goalless first half of the 1986 Soccer World Cup quarter-final.

Steve Hodge, the former England player who says Maradona swapped shirts with him at the end of the game in Mexico City, is selling the shirt, which is set to fetch more than £4 million (R77 million).

Auctioneers Sotheby’s said they hired an external company that had provided a “conclusive photomatch” that proved it was authentic.

Dalma Maradona claimed the jersey her father wore in the second half, when he also scored one of the greatest goals in World Cup history, was in the hands of another owner, but she declined to name them.

“It’s not that one. I don’t want to say who has it because it’s crazy. He (Diego Maradona) said it. He said, ‘How am I going to give him the shirt of my life?'” she told reporters.

“This former player thinks he has my dad’s second-half jersey, but it’s a mix-up, he has the one from the first half.

“We wanted to clarify that so that people who want to buy it know the truth,” Dalma said in separate comments to Channel 13 television.

The photomatching process had involved matching the shirt “to both goals examining unique details on various elements of the item, including the patch, stripes, and numbering”.

It added that Diego Maradona himself had acknowledged the provenance of the shirt himself, in his book “Touched by God”, and he recalls giving it to Hodge at the end of the match.

The online auction is scheduled for April 20 to May 4.