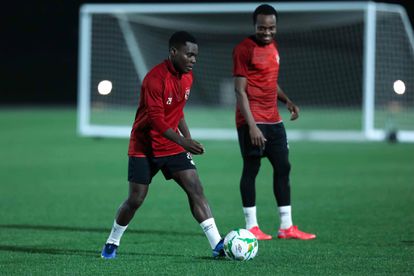 Tau was unavailable throughout the Club World Cup after suffering a muscle injury during Al Ahly’s 3-0 Egyptian League Cup loss to Smouha in January, but he has now notably completed his injury rehabilitation.

Recently it was confirmed that Tau had begun to take some part in training, and there is now more good news – from an Al Ahly perspective at least – ahead of Saturday’s CAF Champions League clash against Mamelodi Sundowns in Cairo.

Tau was initially expected to be out for just four weeks

“The coaching staff had to rest a number of players during El-Makkasa game, Ali Maaloul and Mohamed Abdelmoneim needed the time off the pitch,” the club’s director of football Sayed Abdelhafiz commented.

“We have four important games against Sundowns and Al-Merrikh in the Champions League, we need our players to be ready by then.

“Even the best players in the world are benched when the coaching staff decides it. We have the motive to go for the third consecutive CAF Champions League title, no one has ever done it before.

“Percy Tau is 95% percent ready for Sundowns game. We decided to rest him in El-Makkasa game to make sure he’s fit for Sundowns clash.

“On the other hand, Ayman Ashraf will probably not be able to participate, but Abdelmoneim and Maaloul are ready.”

This latest injury news will also allay any concerns that Tau could miss South Africa’s upcoming match against France, scheduled to take place in the March international break.