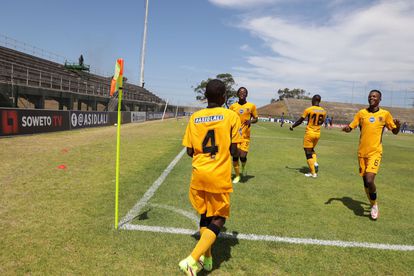 Vilakazi was brought back into the Amakhosi Diski Challenge team, and the young midfielder helped his side beat TS Galaxy 2-1 in their match played at Tsakane Stadium this past weekend.

The crucial strike was Vilakazi’s second goal for the Glamour Boys since joining the club at the start of the 2022 from Doornkop Students, while it came just weeks after he was reported to have been banished by Chiefs and Khumalo from the Diski Challenge team.

However, according to coach Vela Khumalo, this couldn’t be further from the truth.

“We had six key players missing. We gave other lads time to come in and they won the game. I am also happy with the performance. The boys wanted to emulate the first team’s result from Saturday,” said Khumalo, as quoted by The Citizen.

“Look at Mfundo, he’s 15 years old, and he creates a goal out of nothing. He took on players, dribbled past them and he gave us what we wanted, which was a win.”

“We need to manage him – he is a young boy and very disciplined. I am not entertaining the social media talk about him. He’s at school and is part of the academy at the moment. As a player, he will grow and we will help him to minimise mistakes most importantly.”