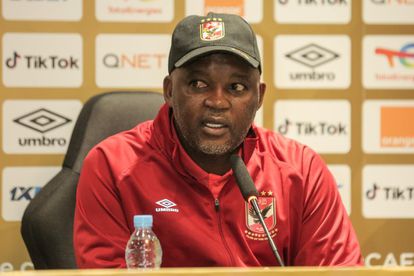 According to Soccer Laduma, the Moroccan outfit entered the second leg trailing 2-1, but managed to level matters on aggregate after just five minutes thanks to Fabrice Ngoma’s close-range header.

Al Ahly were given a lifeline after being awarded a penalty following a Video Assistant Referee (VAR) review.

However, the visitors were unable to profit after Ali Maaloul’s spot-kick was saved by Anas Zniti.

However, Al Ahly did manage to get back on level terms on the stroke of half-time when Maaloul’s corner was nodded home by Mohamed Abdelmonem at the near post.

Percy Tau failed with a golden opportunity for Al Ahly

Bafana Bafana star Percy Tau had a golden opportunity to put Al Ahly ahead eight minutes after the restart, but he failed to beat Zniti in a one-on-one situation.

With Raja Casablanca piling on the pressure late in the match, Tau’s night up front came to an end with eight minutes remaining on the clock as he made way for Salah Mohsen.

Al Ahly managed to hold on for the draw and claimed a 3-2 aggregate win to advance to the final four.

They will meet Algerian side ES Setif in the semi-finals.

READ | KAIZER CHIEFS LATEST: BAXTER VS HUNT – WHAT ARE THE STATS SAYING?