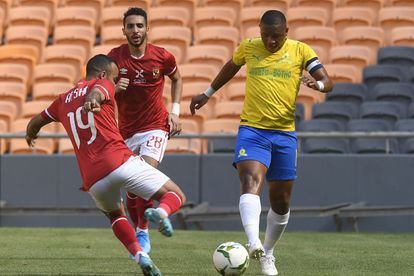 Mamelodi Sundowns and Pitso Mosimane’s Al Ahly have qualified for the quarter-finals of the CAF Champions League – and here is who they could face!

Mamelodi Sundowns completed a rare and crucial double over Pitso Mosimane’s Al Ahly on route to topping Group A, thus giving them an easier passage in the knockout stages.

They were convincing and deserved table-toppers, earning the right to face one of the other groups second-placed sides.

INTERNATIONAL INTEREST: WORLD’S 3 MOST EXPENSIVE FOOTBALL PLAYERS! EACH WORTH MORE THAN R1 BILLION!

Mamelodi Sundowns and Al Ahly will avoid one another in the Last 8 after both sides qualified from the same group.

Masandawana will be firm favourites to progress to the semi-finals regardless of which of these opponents they are drawn against in Tuesday, 5 April’s official draw in Cairo.

Meanwhile, while it was not pretty at times, Al Ahly managed to scrape into the knockout stages of this year’s CAF Champions League.

After succumbing to back-to-back losses against Mamelodi Sundowns, Mosimane’s team had to dig deep just to qualify for the quarter-finals, not something the defending champions are used to.

Mosimane and Percy Tau will do their best to ensure a dream final against Mamelodi Sundowns – and shot at redemption.

However, they will have to go through some very difficult opponents to get there.