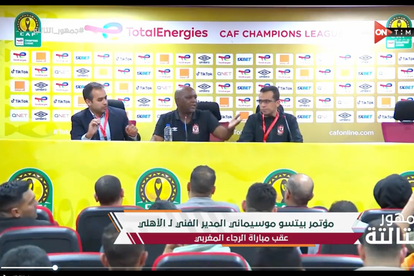 Pitso Mosimane is truly an emotional man, and an Egyptian journalist now knows it better than anyone in the media.

As The South African reported on Saturday evening, Pitso’s Al Ahly took a step closer to the CAF Champions League semi-finals. The Red Devils earned a 2-1 home win over Moroccan giants Raja Casablanca in a first-leg quarter-final that was played in Egypt.

Following the event, a journalist got on the wrong side of Pitso by asking about the selection of Hossam Hassan, a player the South African coach has not been selecting.

‘Are these people crazy?’ Pitso is heard saying in the video at the press conference.

Check out the full video below as shared by Lorenzo Kohler on Twitter.

In related news, the DStv Premiership champions took a 2-1 defeat at the hands of Angolan giants Pedro de Luanda on Saturday evening in a CAFCL quarter-final first leg.

Lyle Lakay’s early 6th-minute goal for Kabo Yellow was canceled out by two first-half goals from Tiago Azulao and Yano.