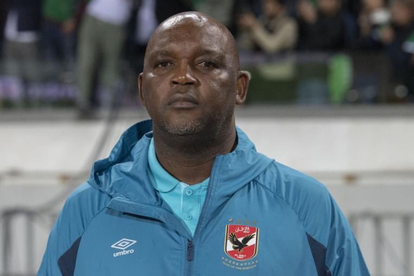 On Monday, CAF announced Morocco as the country to host the competition’s final for the second successive season.

According to CAF, both Morocco and Senegal had submitted their bids to host this year’s CAF Champions League final.

However, Senegal withdrew their bid and, thus, leaving Morocco with the only country vying for the hosting rights of the final.

But Mosimane, and definitely not him alone across the African continent, isn’t happy with the decision because Wydad Athletic Club are almost certain to reach the final.

Wydad hold a 3-1 advantage over Petrol de Luanda ahead of the return leg of the CAF Champions League semi-finals, and they are most likely to meet Al Ahly who beat ES Setif 4-0 in the other semi-final’s first leg.

And should Wydad make it to the final, they will certainly enjoy home ground advantage in the final against, possibly, Al Ahly.

This is because the CAF Champions League final is played over a single leg, meaning whoever wins the match on 30 May 2022 will be crowned African champions.

What doesn’t sit well with Mosimane is that Morocco were never mentioned as the possible hosting country until after the first legs of the semi-finals.

And that gives the impression that whoever took the decision to allow them to host the CAF Champions League final was waiting for the Wydad result.

Surprisingly, CAF ignored Al Ahly’s letter, dated 8 May, to have the Champions League final played at a ‘neutral’ venue, and that also raised a few eyebrows.

“Hao, jiki jiki (suddenly), after semi-finals game were decided, there was a loud silence on the country to host the final.

“Then after the first leg of the semi-finals, suddenly Morocco is hosting.”