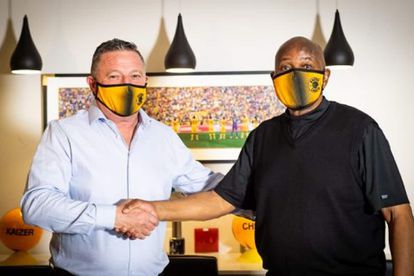 Kaizer Chiefs are through to the quarter-finals of the CAF Champions League, and that’s mission accomplished for Gavin Hunt and his technical team.

Amakhosi held Horoya AC to a 2-2 draw in Conakry, and as a result, the Soweto giants qualified for the knockout stages of the continental event for the first time in 50 years of their existence.

And the Chiefs history books will always have Gavin Hunt’s name as the first coach to achieve this feat.

Just weeks ago, media reports emerged that Gavin Hunt was given the mandate to guide Chiefs to the quarter-finals of the CAF Champions League and finish in the top eight bracket at the end of the season.

The first of the two mandates is done and dusted, and it shouldn’t be that difficult for Chiefs to finish in the top eight even with their well-documented struggles on the domestic front.

This is because Amakhosi are just outside the top eight bracket as they are currently ninth on the PSL log with 24 points from 20 league games.

While expectations are high now that Chiefs have done the unthinkable in the CAF Champions League, Hunt’s team shouldn’t be expected to rise from the ninth position to CAF inter-club spots – in the top three – but it is still possible.

With 10 league games to go, Chiefs have 30 points still to play for, and should they win all their remaining matches then they will finish the season with 54 points.

Hunt has already shown that he can achieve whatever mandate set out for him by the Chiefs management but he just needs the right players and enough time to do that.

Now, what Chiefs have achieved in the CAF Champions League should signal the beginning of greater things to come at Naturena, and for that reason, the club bosses can now keep Hunt as head coach much longer and see if he can or cannot bring back the old glory days.