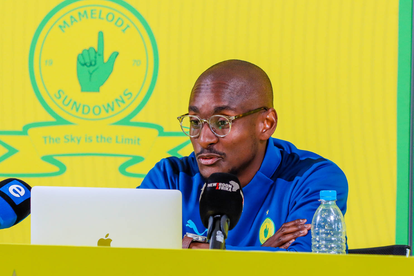 Mamelodi Sundowns do lose games too. The DStv Premiership took a 2-1 defeat at the hands of Angolan giants Pedro de Luanda on Saturday evening in a CAFCL quarter-final first leg.

As The South African reported on Saturday evening, Lyle Lakay’s early 6th-minute goal for Kabo Yellow was canceled out by two first-half goals from Tiago Azulao and Yano.

Speaking on the result after the against Sundowns coach Rhulani Mokwena sought advice from Liverpool’s master manager Jurgen Klopp.

“We play every match to win,” Mokwena said as quoted by iDiskiTimes.

“We came here to try to win, disappointed in the first half, lacking aggression, lacking focus.

“But we showed that we’re much better than our first-half performance in the second half, created more goal opportunities, had more final-third entries, controlled the game a bit more.

“Dominated the field a little bit more but pressing the line a bit higher.

“But I’m reminded of something Jurgen Klopp actually told me when I visited Melwood. I never thought I’d use it because I’m a coach that wants to win every single match. In football either win, lose or draw, you have all those possibilities every time a match starts.

“Jurgen Klopp said me, ‘coach, if you want to succeed in football, lose the right match’. And I think we lost the right match because it doesn’t knock us out, we still have a chance to make it, Mokwena concluded.

Meanwhile, DStv Premiership champions-elect are now looking ahead to the second at the FNB Stadium this coming Saturday.