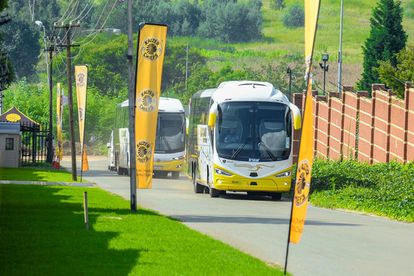 Soweto giants Kaizer Chiefs are going out of their way to make Egyptian side Al Ahly’s stay in South Africa as hospitable as possible! Photo: Twitter @kaizerchiefs

Soweto giants Kaizer Chiefs are going out of their way to make Egyptian side Al Ahly’s stay in South Africa as hospitable as possible! Photo: Twitter @kaizerchiefs

Al Ahly head coach Pitso Mosimane has revealed the reason behind his side’s choice to use Kaizer Chiefs’ training ground ahead of their clash against Mamelodi Sundowns.

Pitso Mosimane has since revealed the reasons behind Al Ahly’s decision to make use of the state of the art facilities at Kaizer Chiefs’ training village in Naturena.

READ: Amakhosi starlet making great progress in the reserve team despite word of expectation on the 15-year-old wizard’s shoulders!

“Thanks to Kaizer Chiefs, thanks to the chairman Kaizer Motaung for offering us the facilities.” Pitso Mosimane said as quoted by IdiskiTimes.

“We could not find any other facility in the country that has the pitch, that has area for the ice-baths, massages and the pool and the saunas. There is no facility in South Africa that has that. Naturena has those facilities.

“It was good for us to see because I hadn’t seen the facility myself and what an eye-opener to see there is team in Africa that has facilities like this, not just the pitch but the whole hospitality by Kaizer Chiefs, also the lounge.

“Al Ahly will tell you that it’s a high-level facility. It’s the best facility in Africa, one of the best two I’ve seen on the continent in my 20 years as a coach.”

We have a good relationship with Chiefs – Pitso

“There is a very good relationship outside football that Chiefs has handed over to Al Ahly.” Pitso Mosimane said as quoted by the same publication.

“On the pitch we were opponents in the CAF Champions League final last year, but off the pitch we’re not opponents and I feel humbled by Kaizer Chiefs.”

Daily devotion: Your bible verse and prayer for 30 July 2022