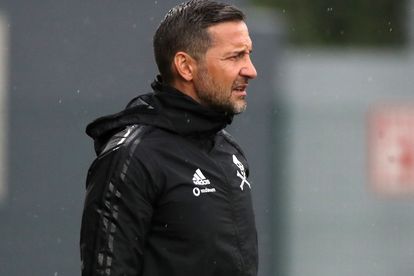 The Soweto giants will take on Morocco’s RS Berkane in Uyo, Nigeria in this season’s decider.

Kick-off at the Godswill Akpabio International Stadium is at 21:00 (SA time).

Zinnbauer quit the Buccaneers days before the start of the 2021/22 campaign, leaving assistants Fadlu Davids and Mandla Ncikazi in charge of the side.

At the time the German mentor said he stepped away from the role “Mainly for family reasons. It is well known that my son had a serious accident so I just want to be with him more.”

Davids and Ncikazi remain co-coaches of Orlando Pirates to this day.

Well wishes for the Buccaneers have streamed in ahead of kick-off.

Mark Fish, now 48, was signed by Orlando Pirates in 1994 after former club Jomo Cosmos were relegated.

He was part of the Orlando Pirates squad which won the 1995 African Champions League – and picked up their first ‘star’ – and captained the Buccaneers when they beat JS Kabylie in the 1996 CAF Super Cup.

In total, he played 110 matches in all competitions for the Soweto giants.

He was also a key member of the Bafana Bafana squad which triumphed in the 1996 Africa Cup of Nations (AFCON).