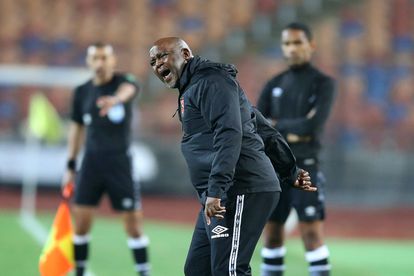 Al Ahly coach Pitso Mosimane says he “doesn’t play for silver” after confirming he gave away his medal after losing the CAF Champions League final.

At the post-match medal ceremony, Al Ahly players were quick to remove their silver medals.

That move didn’t impress Mamelodi Sundowns coach Steve Komphela who took to social media to slam them for showing a lack of respect.

However, Pitso Mosimane defended his players, and explained that he also gave his medal away.

“I don’t play for silver medals, I play for gold,” he told Andile Ncube during a live interview on SABC Sport.

“Don’t give me a silver medal, I don’t want it. I took my silver medal off, I gave it to the photographer.”

Pitso Mosimane also once again hit out at CAF’s decision to host the final at Wydad’s home ground, the Stade Mohamed V, which he said also played into the decision to disregard their medals.

“Have you understood why? Where was the final played? In Morocco. Where did the CAF president put the final, where and when was that decision made,” he responded.

“You can’t tell me, I must tell my players to keep their medals. You know me I’m direct, I speak to the relevant person, direct. It’s not for public, it’s not for media, I tell you straight.

“If I want to the third Champions League, I work for it, don’t dim my light. Be fair, be good because everybody can see and the world can see.”

Polestar 6: The electric roadster concept will be put into production

Will the Proteas spring selection surprises against England?

Royal AM vs Orlando Pirates: How to watch the match on TV