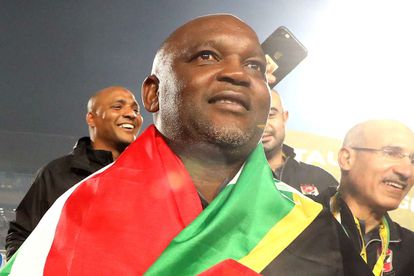 READ | AL AHLY VS MAMELODI SUNDOWNS: HOW TO WATCH THE MATCH ON TV?

Kick-off for the CAF Champions League encounter at Cairo International Stadium in Alexandria is at 21:00 SA time.

On Thursday, some 48 hours before the titanic clash, Mosimane shared a picture of him with Wenger accompanied by a powerful caption.

According to Mosimane, the meeting with Wenger was supposed to last for 15-20 minutes but it ended up going on for up 120 minutes.

Mosimane said he was humbled to hear the words of wisdom from the 72-year-old manager who left Arsenal in 2018.

Mosimane’s meeting with Wenger comes a few weeks after he was surprised with a handshake and a hug by Chelsea manager Thomas Tuchel.

The encounter between the two happened during the presentation of medals, awards and trophies at the FIFA Club World Cup.

Mosimane and his Al Ahly charges finished third overall, and walked away with the bronze medal at the annual FIFA Club World Cup.