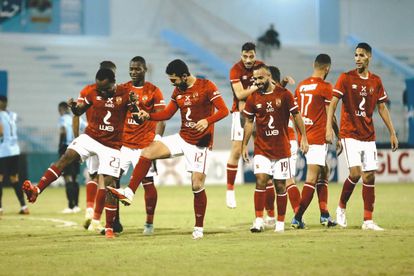 Percy Tau scored his third goal in what was his fifth match of the 2021/22 Egyptian Premier League season on Monday. Photo: Twitter @AlAhlyEnglish

Percy Tau scored his third goal in what was his fifth match of the 2021/22 Egyptian Premier League season on Monday. Photo: Twitter @AlAhlyEnglish

Al Ahly are through to their third consecutive CAF Champions League final following a 6-2 aggregate win over ES Setif on Saturday.

Going into the return leg in Algeria, Pitso Mosimane’s men had a 4-0 lead from the first leg that was played in Cairo last week.

Now, on Saturday, ES Setif needed to beat Al Ahly by five clear goals to advance to the final but it was always going to be a mountain to climb.

Al Ahly were first to open the scoring through Ahmed Abdel Kader in the second minute but Setif drew level before the break via Ahmed Kendouci.

The second half saw both sides go at each other, but it was ES Setif who created the better goalscoring chances.

And they were rewarded in the 60th minute when Riad Benayad made it 2-1 to ES Setif to give the Algerians a glimmer of hope.

With the game approaching its conclusion, and ES Setif certain of a narrow victory that wouldn’t have been enough anyway, Mohamed Sherif struck to make it 2-2 for Al Ahly.

READ | MTN8: THESE SIX TEAMS ARE OFFICIALLY IN NEXT SEASON’S TOURNAMENT

And that’s how the match ended, with Al Ahly advancing to their third successive CAF Champions League final under Mosimane.

Al Ahly will now meet Wydad in Morocco on Monday, 30 May 2022 for the ultimate prize and a place in the next FIFA Club World Cup.

Wydad advanced to the final with a 4-2 aggregate win over Petro de Luanda who ousted Mamelodi Sundowns in the quarter-finals.