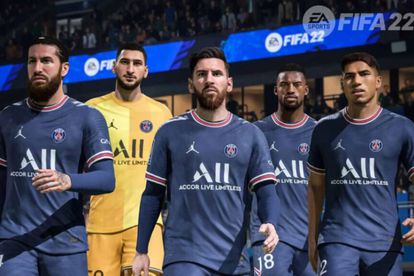 EA Sports have revealed the FIFA 22 Ratings of the world’s elite footballers ahead of the release of the latest edition of the popular video game franchise.

Lionel Messi remains the top-rated player in the FIFA 22 Ratings, having made a blockbuster move to Ligue 1 heavyweights Paris Saint-Germain.

Bayern Munich striker Robert Lewandowski splits Messi and his long-time rival for the title of best footballer in the world, Cristiano Ronaldo, who occupies third spot as he continues to defy age, beginning a new chapter with Manchester United.

PSG may find themselves banned on couches the world over when FIFA 22 drops, with their team stacked with highly-rated stars. As Messi joins the likes of Neymar and Kylian Mbappe in the French capital.

On the FIFA 22 Ratings, five players share an overall rating of 91, putting Ronaldo on the same level as Neymar, Mbappe, Kevin de Bruyne and Atletico Madrid’s Jan Oblak, who is the top-rated goalkeeper in the game.

Liverpool quartet Mohamed Salah, Virgil van Dijk, Alisson Becker and Sadio Mane have all come in with and overall of 89 in the FIFA 22 Ratings.

Spurs and England captain Harry Kane will be the highest-rated player in action in the newly-formed UEFA Europa Conference League. Messi, Lewandowski and Ronaldo will headline a week of Champions League action that is loaded with intrigue.

Champions League LIVE: Track all the scores and starting XIs