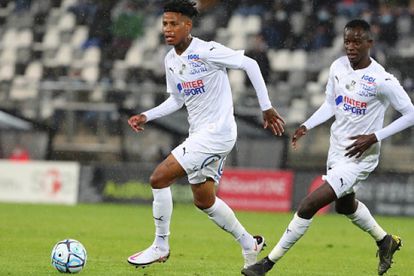 Bongani Zungu’s contract with Amiens is coming to an end and the South African has dropped a BOMBSHELL – hinting at a massive move!

READ | BATTLE FOR BENNI: WILL MCCARTHY CHOOSE CHIEFS OR PIRATES?

Zungu’s contract expires with Amiens at the end of June, according to KickOff.

Meaning, the former Bafana Bafana star has just over two months of his contract left. He will then be a free agent that is able to sign for the likes of Kaizer Chiefs, Orlando Pirates or Mamelodi Sundowns.

BAFANA BAFANA: HUGO BROOS PUTS HIS LIFE ON THE LINE FOR SA!

Zungu is open to a move, he is confident and ready to start a new journey elsewhere come the end of his contract.

“I’m a good player, I know that, and if I invest myself and work hard, I can find a club in Ligue 1 or anywhere else in the world,” he added. “It’s an option if we can’t come to an agreement during the discussions.”

He clearly knows his value as a player. The talented midfielder believes he could play anywhere in the world.

Where would you like to see Zungu play next?