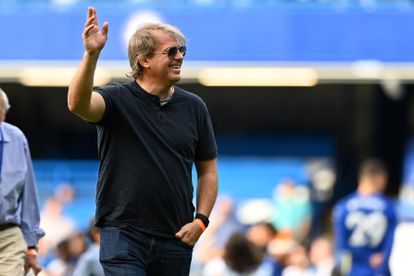 Chelsea’s prospective US owner Todd Boehly comes onto the pitch to join the lap of honour after the English Premier League football match between Chelsea and Watford at Stamford Bridge in London on 22 May, 2022. Photo: Glyn KIRK / AFP

Chelsea’s prospective US owner Todd Boehly comes onto the pitch to join the lap of honour after the English Premier League football match between Chelsea and Watford at Stamford Bridge in London on 22 May, 2022. Photo: Glyn KIRK / AFP

The Premier League club was put on the market in early March, days before Abramovich was sanctioned by Britain following Russia’s invasion of Ukraine.

The billionaire, also the target of European Union sanctions, was described by the UK government as part of Russian President Vladimir Putin’s inner circle.

Chelsea have been operating under the terms of a strict government licence that expires on 31 May, meaning they have been unable to renew contracts for existing players and have faced a transfer ban.

Completion of the takeover has been a lengthy process due to concerns over the potential for Abramovich to profit from the sale of the London club.

But the Premier League gave the green light on Tuesday evening and hours later ministers said they would permit Chelsea’s sale.

Culture Secretary Nadine Dorries, whose brief includes sport, tweeted: “Given the sanctions we placed on those linked to Putin and the bloody invasion of Ukraine, the long-term future of the club can only be secured under a new owner.

“We are satisfied the proceeds of the sale will not benefit Roman Abramovich or other sanctioned individuals.”

A consortium led by Boehly, a co-owner of baseball’s Los Angeles Dodgers, beat off competition to agree a record deal to buy the club earlier this month.

At one stage it seemed close to collapse over concerns proceeds would not reach good causes as promised by outgoing owner Abramovich.

The Russian, who bought Chelsea in 2003, denied he had asked for his £1.5 billion loan to the club be repaid when the sale was concluded.

The government said in its statement it was satisfied that the “full proceeds” of the sale would not benefit Abramovich or any other sanctioned individual.

“We will now begin the process of ensuring the proceeds of the sale are used for humanitarian causes in Ukraine, supporting victims of the war,”

Of the total investment, £2.5 billion (about R39.4 million) will be deposited into a frozen UK bank account to be donated to a charitable foundation for the benefit of victims of the war in Ukraine.

The new owners will commit £1.75 billion (about R27.6 million) in further investment “for the benefit of the club”.

Former Chelsea chief executive Peter Kenyon told the BBC that the end of the saga would be a “complete relief” for everyone connected to the club.

“We’ve got a very short transfer window and plans will have been made before,” he said.

“They have already lost some players through not being able to re-sign them so I think everybody — the squad and the management — will be relieved they can get on with the job they’re employed to do.”

Thomas Tuchel’s side, who won the Champions League last season, finished third in the Premier League — 19 points behind champions Manchester City — and were beaten by Liverpool in the finals of the FA Cup and League Cup.

The German manager is set to lose key defenders Antonio Rudiger and Andreas Christensen on free transfers to Real Madrid and Barcelona.

Tuchel, in an interview on Chelsea’s website conducted before the sale was confirmed, said the club had been operating at a “huge disadvantage” and would need to be nimble in the transfer market.

Reports on Wednesday said the former Paris Saint-Germain boss would be handed a £200 (about R3.4 billion) million transfer kitty.

Chelsea have been transformed since Abramovich bought them in 2003 for just £140 million (about R2.4 billion), winning 19 major trophies in his 19-year reign — including five Premier League titles and two Champions League triumphs.

Boehly also has a track record of delivering sporting success with the Dodgers.

Thanks to heavy investment in players, they have made the MLB (Major League Baseball) playoffs every season for the past nine years and won their first World Series for 32 years in 2020.