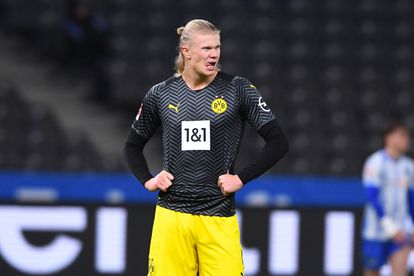 Barcelona could be set to sell up to eight first team squad members in a bid to fund a move for Norwegian superstar Erling Braut Haaland.

Barcelona have endured a difficult first season without Lionel Messi, heading into the new year in fifth place in La Liga and with a cloud of financial trouble hanging over their heads.

“Barcelona need to get rid of big wages and big players, but it’s possible and they’re confident they can do it,” Balague said on BBC Radio 5 Live’s Euro Leagues podcast.

“Laporta is selling a hopeful future.

“He’s trying to imply they are up for getting any of the big players and Haaland is possible, very possible.

“How do they get Haaland? They get rid of a bunch of players and Philippe Coutinho, Samuel Umtiti, Sergino Dest, Clement Lenglet, Frenkie de Jong, Martin Braithwaite, Oscar Mingueza, Luuk de Jong are for sale and then they’re able to bring in someone. It’s complicated, but not impossible.”

Dortmund are reluctant to sell the striker meaning it is likely his 75 million Euro release clause will need to be triggered.

Haaland has scored 76 goals in 74 games for Dortmund since joining from Red Bull Salzburg in January 2020, and he will almost certainly attract other suitors.

Aiding Barca’s cause is the relationship between Haaland’s agent Mino Raiola and Laporta.

“He would get more money in the Premier League but he prefers Spain,” added Balague. “The lure of Real Madrid and Barcelona is still powerful.

“The relationship between [Haaland’s agent] Mino Raiola and Laporta is very close. If the money is there they [Barcelona] would be considered and in exchange, Laporta would sign some of Raiola’s young players.

“Barcelona have been linked to the Ajax right-back, and Raiola client, Noussair Mazraoui.

“If Barcelona do manage to get that money, Haaland would love to go to Barcelona. But that is what Raiola is telling Laporta. I very much doubt he has stopped talking to other clubs, including Juventus, Paris St-Germain or Premier League ones.”