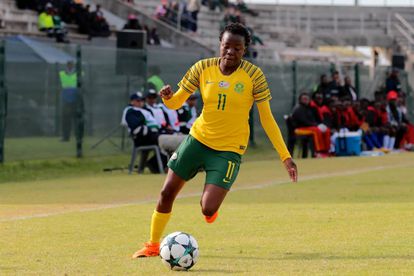 Banyana Banyana striker Thembi Kgatlana has returned to the USA to sign with Racing Louisville FC ahead of the start of the new season.

In a statement released on Wednesday, Racing Louisville confirmed that Kgatlana signed a two-year deal with an option to renew it beyond June 2024.

Racing Louisville further revealed that they paid a transfer fee to Atletico Madrid to acquire the services of Kgatlana.

Kgatlana returns to where she kicked started her overseas journey (USA) in 2018 when she signed for Houston Dash as a 22-year-old.

Kgatlana expressed delight at joining Racing Louisville whom she will link up with soon after the Women’s Africa Cup of Nations which is currently underway in Morocco.

THEMBI KGATLANA LEAVES ATLETICO MADRID FOR RACING LOUISVILLE IN THE US

“I’m very excited to have this opportunity to return to the NWSL with Racing Louisville,” Kgatlana told the club website.

“It has always felt like there is unfinished business for me in the league, and I can’t wait to get started. From the moment I spoke with Kim, it was clear that it is an exciting project.

“I joined Beijing BG Phoenix shortly after he had left and heard only good things, so it was an easy decision. I look forward to seeing everyone after the Cup of Nations!”