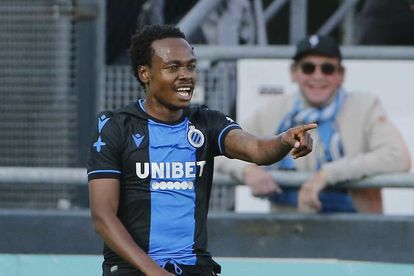 Percy Tau has been urged to consider signing for a Bundesliga outfit, as he seeks to stamp his mark in Europe.

Work permit issues have prevented the former Mamelodi Sundowns player from turning out in the English Premiership, since making the move to Brighton and Hove Albion in 2018.

As a result, he has had to take up residency in Belgium where he has represented Royal Union Saint Gilloise on loan, before a spell in the country’s top division with Club Brugge.

With his loan stint in Brugge nearing its end, Tau’s next move is anyone’s guess, but Bafana legend Sibusiso Zuma has urged him to take the leap and try for a move to Germany.

“I still believe that he can make us strong, but he needs to work very hard, and playing in Germany will help him big time, I promise you,” Zuma told the media at a Bundesliga event in Johannesburg earlier in the week. “If he can go find a team in Germany, it will do him wonders and if he can get a bigger club in Germany, that’s even better. “Percy can still switch gears and help.”

Bundesliga tipped as the next step for Bafana star

Zuma himself had a spell in Germany, as he made up a decent South African contingent in the Bundesliga, alongside the likes of Bradley Carnell, Steven Pienaar, and Delron Buckley.

The former Orlando Pirates, Supersport United and Mamelodi Sundowns striker turned out for Arminia Bielefeld during their time in the top flight.

Tau’s spell in Belgium has seen him bag four goals with eight assists, a continuation of his season in the second tier, where he was named the Proximus League’s Player of the Season.

His time in Brugge has seen him compete among Europe’s elite, with Club Brugge turning out against Real Madrid in the Uefa Champions League, before an appearance at Old Trafford in the Europa Cup against Manchester United.

More than 30 rhino orphans get ‘new home’ in Limpopo