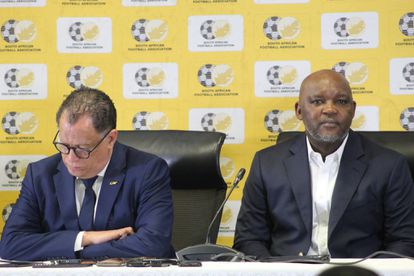 Pitso Mosimane is one of the hottest free agents in not just South Africa but Africa too. Could he be lining up a famous return to coach Bafana Bafana?

Pitso Mosimane has made his ambitions clear- he wants to win the African Cup of Nations. This is the main focus and goal of Bafana Bafana too. They are closer than ever before to qualify for AFCON with just Libya sitting between themselves and the African continental showpiece.

After falling agonizingly close to the next stage of World Cup Qualifiers, Hugo Broos’ men turned their attention to qualifying for AFCON and returning our nation to its glory days. Mosimane has tasted tremendous success in Africa but he is yet to succeed as Bafana coach or to win AFCON.

MUST READ: BAFANA BAFANA INTERNATIONAL HIJACKED AND TIED UP IN THE BOOT

Mosimane want’s to win AFCON and so does Bafana Bafana. He has sold his requirements to any prospective nation – they must tell him what their goal is and show them their plan. Their detailed and structured steps to achieve winning AFCON.

This is currently the greater plan and focuses on SAFA and the national team. If we can present a solid, structured and organized plan, we could pursue Mosimane.

Mosimane has tasted tremendous success everywhere except with the national side. He is the most successful PSL coach in history with an incredible five DStv Premiership titles. He has also conquered the CAF Champions League with two sides – Mamelodi Sundowns and Al Ahly and he led the Egyptian giants to a record third place in the FIFA Club World Cup – twice.

Equaling the best-ever finish by an African side in the tournament. He will want to redeem himself where he grew up and made a name for himself. Imagine Mosimane teaming up with Hugo Broos or managing the potential in our current youthful and exciting squad

3) HOME IS WHERE THE HEART IS

Mosimane was born in South Africa. It is where he grew up, where his love for the beautiful game comes from and where he supported and watched his favourite team and sport. Mosimane played soccer with his friends here, he went on holidays, made sentimental memories here and this is where his family is.

SA is certainly not lacking in sentimental value for Mosimane who achieved and made a name for himself in Tshwane, coaching Mamelodi Sundowns to PSL success year in and year out as well as tasting glory across the domestic competition. It is highly likely that he will return to coach in SA one day. I mean, he technically is as he is busy with his schools and a course teaching the wisdom and skill he has learned in recent years. He has already spent time with Royal AM in recent weeks.

Millions of South Africans will hope and dream of seeing Mosimane coach Bafana Bafana again someday. It is certainly not impossible. However, for now, he remains a free agent and Broos remains in charge of the national side.

Do you want to see Mosimane coach Bafana Bafana one day? Let us know in the comments below. Tell us how you think he’d do.