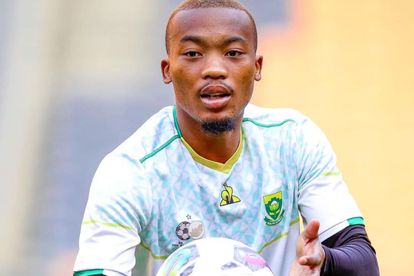 Cape Town City midfielder Khanyisa Mayo has described Bafana Bafana’s victory over Sierra Leone as a “perfect way” to make his debut for the national team.

Mayo actually got his maiden call-up to the South Africa squad that was going to take on Morocco in the Africa Cup of Nations qualifiers in June.

However, he suffered an injury while at camp and missed the trip to North Africa.

Mayo came on off the bench late in the second half as the Belgian tactician’s charges hammered Leon Stars 4-0 on Saturday at the FNB Stadium.

After the game, the 24-year-old took to social media to express his excitement after wearing the yellow and green jersey for the first time.

“What a perfect way to have your first debut representing your country.

“All round excellent performance.”