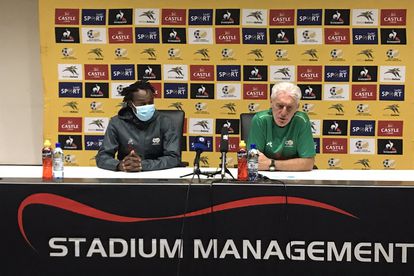 For the second match running there will unbelievably not be a single Kaizer Chiefs nor Orlando Pirates representative in the Bafana Bafana starting line-up.

The same scenario played out last Friday when Bafana Bafana were held to a goalless draw by Zimbabwe in Harare.

It’s not so surprising that there are no Buccaneers players in the starting XI as none were named in coach Hugo Broos’ original 23-man squad, but there were as many as FIVE Amakhosi players among that group.

They have, however, all missed out on selection for a starting spot in Bafana Bafana’s crucial 2022 Soccer World Cup qualifier against Ghana at the FNB Stadium on Monday.

All five have however been named among the substitutes.

Mamelodi Sundowns have the most representatives with no fewer than four starters, with SuperSport United boasting two, while Hapoel Tel Aviv (Israel), TS Galaxy, Maritzburg United, Baroka FC and Al Ahly (Egypt) all have one player.