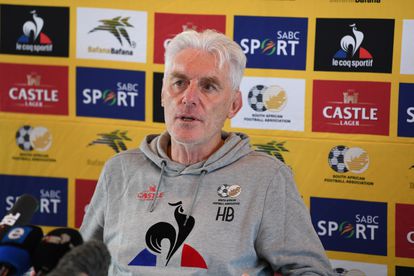 Bafana Bafana head coach Hugo Broos has confirmed that a his side will be completely reshuffled for their clash against France.

Despite creating numerous opportunities to score, Hugo Broos’ side played out to a goalless draw against Guinea on Friday evening and a number of changes will be made for the France clash!

READ NOW: France vs Bafana sold out! And for a good cause with R1.6 million DONATION!

Hugo Broos to ring the changes for France clash!

“Against France maybe a little bit less, because the opponent is much better also but there will be new players again like Mobbie, Lyle Lakay. So they will play against France because I want to give them a chance to show their qualities.”

“The players will be motivated against France,” Bafana head coach Hugo Broos said ahead of his side’s clash.

“We don’t have the chance every day to play against the World Champions. I’ve heard that it will be a full stadium. There will be a lot of interest and the players from South Africa can show themselves off.”

Hugo Broos is expected to continue experimenting with his starting lineups in preparation of the 2023 AFCON qualifiers which takes places later this year.