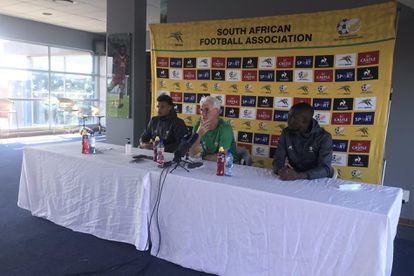 Bafana Bafana coach Hugo Broos has accused DStv Premiership sides Mamelodi Sundowns and Orlando Pirates of ‘not wanting the national team to be successful’ after the late withdrawals of Thabiso Kutumela and Goodman Mosele.

Both Mamelodi Sundowns’ Kutumela and Orlando Pirates’ Mosele failed to turn up for national duty ahead of the back-to-back 2022 Soccer World Cup qualifiers against Ethiopia on Saturday, 9 October (away) and Tuesday, 12 October (home) which infuriated Broos.

The 69-year-old Belgian mentor suggested that the Brazilians and Buccaneers have deliberately sabotaged Bafana Bafana.

“On Monday I was a frustrated coach because I get the feeling a little bit that some people in this country don’t want Bafana Bafana to be a successful team,” Hugo Broos said.

“Three months ago when I came here, I wanted to organise two friendly games but I had to cancel one because it was made impossible. Then there was a meeting with the coaches. I wanted to meet with all the coaches from the GladAfrica Champions and the Premiership; it was not possible.

“Then there was an incident with Orlando Pirates where I and my assistant were not allowed to see their game against Sundowns.

“Then [Monday] Sundowns organised a vaccination for Thabiso Kutumela. I have nothing against vaccination because it is a good thing if you are vaccinated but I’m against the timing. You organise a vaccination during a camp.

“The Fifa rule says that after the last games, you have to release the players. No activity is possible during the Fifa period in the club, but they organised a vaccination. Because Thabiso was not there, we couldn’t refuse it; the club pays him, so I had to change all my plans.”

At the time of publishing, Broos had not announced a replacement for Kutumela, leaving just 22 players set for departure on Thursday for the clash at the Bahir Dar Stadium in Ethiopia on Saturday at 15:00 SA time.

On This Day in South Africa: What happened on 01 January?

‘I was with Mampintsha’: L’vovo discharged from hospital