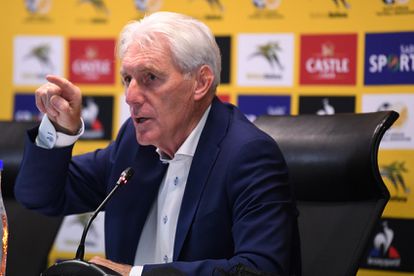 Bafana Bafana finished 2021 ranked in a lowly 68th position as revealed in the latest – and final – FIFA world rankings for last year. A largely forgettable year will inevitably be remembered for the the controversial 1-0 loss Bafana Bafana suffered against Ghana at Cape Coast Sports Stadium, which stole headlines worldwide.

FULL LIST: ALL THE DEALS DONE IN THE DSTV PREMIERSHIP JANUARY WINDOW!

Needing only to avoid defeat to advance to the next round of 2022 Soccer World Cup qualifying, South Africa were sunk by a 33rd-minute penalty by Ghana skipper Andre Ayew.

However, the controversial officiating during that match in Ghana led to a fierce backlash, with SAFA lodging a forming complaint, asking FIFA to investigate alleged referee bias and match manipulation.

Senegal referee Maguette Ndiaye found himself at the centre of the controversy following his inept performance with the whistle.

Ndiaye made a series of baffling decisions during the Group G clash in Ghana, but none proved more costly than the one to award the Black Stars the ultimately match-winning penalty.

It also led to Hugo Broos’ first defeat in charge of the team and yet another failed campaign to qualify for a World Cup.

However, despite a severe backlash from SAFA, their complaints did not find favour after it was ruled that the Group G fixture would not be replayed.

The result saw South Africa drop a couple of spots to 68th in the rankings – and that is where they finished the year.

Speaking exclusively to Sport24, Broos admitted to being shocked by FIFA’s decision, calling it “a great deception”.

“At one side, I was a little bit afraid of that (FIFA not reviewing SAFA’s complaint) because we have to prove that the referee was against us, but I think the proof is there,” he said.

“From 71 decisions he made, there were 47 incorrect decisions – and, from the 47 wrong decisions, there was 90% against South Africa.

“The proof is there, but then you have to prove that maybe Ghana gives him money or maybe he was betting on that game, and this is something we could not prove… then FIFA said the proof is not there, and we cannot accept your complaint.”

Broos has been back in his native country

The Bafana coach is currently back in Belgium, enjoying a break, but will soon return to South Africa.

“This is now the past,” he said, referring to failing to qualify for the World Cup.

“We can’t change it, and now we have to focus on something new, and that is the qualifiers for Afcon 2023.”

Daily devotion: Your bible verse and prayer for 03 July 2022