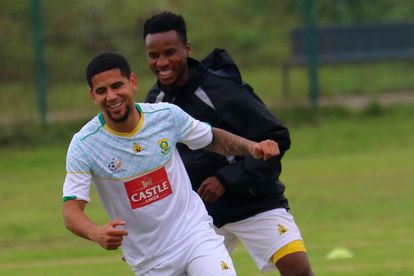 Bafana Bafana coach Hugo Broos has finally opened up about the national team prospects of Themba Zwane and Keagan Dolly.

Both Zwane and Dolly have not yet been picked in any of Broos’ Bafana Bafana squads since the Belgian’s appointment.

Broos was clear on his philosophy

Upon his arrival in the country and appointment as Bafana Bafana coach, Broos made no secret of his philosophy. He stated numerous times that he wanted to playing attacking football and also have a youthful core group to the national team. That approach seemed to be a disadvantage to the likes of Zwane and Dolly, as it largely meant the dismantling of the previous national squad.

Under previous coaches Zwane would be an almost automatic pick into the squad, due to his exploits at Mamelodi Sundowns while Dolly, would even be given every chance to recover from any sort of injury while in the Bafana Bafana camp, by virtue of his talents and his status of being one of the very few South African’s playing in a top league abroad.

He has dismantled almost the whole previous squad

But under Broos, all of that was about to change, with both Zwane and Dolly becoming early causalities of a mission to reduce the average age of the Bafana Bafana side. It was still a shock, however, when Broos did deliver on his promise, but the old guard was quickly forgotten as the youthful brigade has been delivering so far, topping their 2022 Qatar World Cup qualifying group.

However, Zwane’s form at Sundowns all season round, as well as Dolly’s resurgence at Kaizer Chiefs has seen the local football fraternity beg the question, is there still room for them in the Bafana Bafana squad? Or have they had their chance and it is time for the national team to move on now? Broos starts by explaining his past selection processes.

“You have to know I started here with nothing, I came here at a bad moment, at the end of the season. You couldn’t see games any more, the league was finished. Luckily there was the Cosafa Cup and the Olympics, so I saw those, and already had much information. Helman (Mkhalele, Bafana assistant coach) also helped me a lot in the first months. He told me about players, their mentality, everything, even then we didn’t have so much. So the first selection was ‘ok, we’ll take this one, and this one, and we will see.” Said Broos to The Citizen

Broos then explains that the situation has slowly changed since he has been in the country more and now has more control of his Bafana Bafana selection. He then states that the everybody is eligible, and points to examples that have already proven that.

“So now we try to improve, we are at league games every week. Yesterday, we were in Durban (for Arrows v Sundowns) to see players we didn’t know, that we didn’t see … before. The door is not shut for anyone. The day I want a better player, I will take them and we did that in the last squad with Mose Lebusa (though he was ultimately injured) and Sifiso Hlanti.” Broos said.

Broos then teases a possible involvement for both Dolly and Zwane for Bafana Bafana’s next qualifiers.

Do the duo still have a future for Bafana Bafana?

“In every camp we evaluate the team and say ‘ok, there we have to have a bit more quality.’ Those names (Dolly and Zwane), we are following, so who knows, maybe they will be in the squad (for Zimbabwe and Ghana).” Broos concluded on the matter.

READ | KAIZER CHIEFS’ NJABULO BLOM ATTRACTS LA LIGA INTEREST? BUT THERE COULD BE A PROBLEM!

What could give further hope to Dolly and Zwane is the fact that Broos did lament the fact that he needs better quality players to execute his Bafana Bafana game plan better. Was that already a hint?

Would you like to see Dolly and Zwane in the next Bafana Bafana squad? Feel free to comment below.