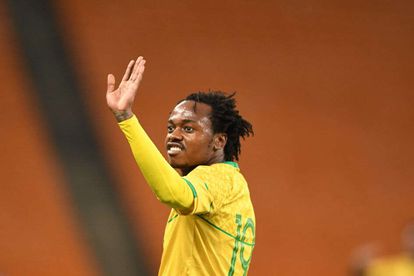 Bafana Bafana have taken control of the Group G log in the 2022 FIFA World Cup qualifiers after two rounds of matches.

And that’s because Hugo Broos’ men recorded a massive 1-0 win over Ghana in their second qualifying match on Monday night.

Bongokuhle Hlongwane scored Bafana Bafana’s only goal on the night to lift the South Africans above the Black Stars on the Group G log.

Bafana Bafana are on four points from two games while Ghana are sitting on three points with a single win and a loss.

Zimbabwe are placed third on the log but will go tied on points with Bafana Bafana if they beat Ethiopia on Tuesday.

The Ethiopians are currently rock bottom with no points to their name after the first round, but could equal Ghana provided they beat Zimbabwe.