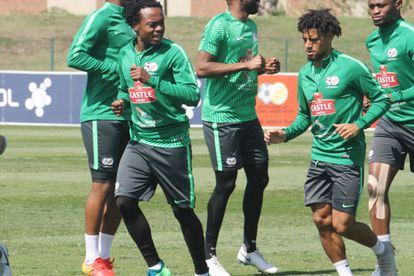 South Africa take on Zimbabwe at home on 4 November before traveling to Ghana on 11 November.

He was excluded from Broos’ side that took on Ethiopia in a double header.

PICTURE | PERCY TAU IS OFFICIALLY BACK IN ACTION! FIRST IMAGE OF HIS RETURN EMERGES!

This was after Pitso Mosimane’s Al Ahly demanded that he stays and recovers in Egypt.

South Africans will be excited to see the Lion of Judah back in the squad.

Amakhosi fans get to celebrate the announcement of Dolly in Broos’ squad. The PSL’s highest-paid player has been in excellent form lately, scoring a brace and assisting three goals in his last two matches!

Unfortunately, their is not as much good news for Orlando Pirates with Goodman Mosele and Vincent Pule being dropped from the squad.