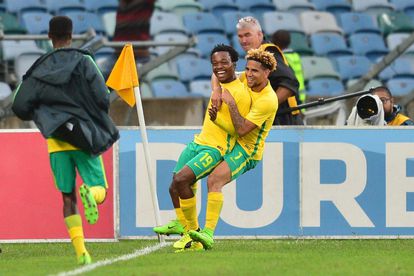 Percy Tau of South Africa celebrates a goal with teammates during the 2017 International Friendly match between South Africa and Guinea Bissau at the Moses Mabhida Stadium, South Africa on 25 March 2017 ©Samuel Shivambu/BackpagePix

Percy Tau of South Africa celebrates a goal with teammates during the 2017 International Friendly match between South Africa and Guinea Bissau at the Moses Mabhida Stadium, South Africa on 25 March 2017 ©Samuel Shivambu/BackpagePix

Percy Tau limped off against Zimbabwe on Thursday causing concerns around his availability while one of the PSL’s most in-form stars make a welcome return.

READ | BAFANA BAFANA: TWO KAIZER CHIEFS PLAYERS LIKELY TO START AND ONE WHO COULD GET A RARE CHANCE

Tau was limping off the field when he was replaced in the second half of the match against Zimbabwe at FNB Stadium.

This was certainly a worrying site for Bafana Bafana fans ahead of their crucial group decider against the Black Stars on Sunday evening.

However, the Lion of Judah did travel with the side ahead of this massive clash.

So, will South Africa have their big star ready in-time? Yes, thankfully Tau is likely to feature and start in Ghana.

In other team news, Victor Letsoalo has served his one-match suspension and is available for selection should Hugo Broos opt to use the PSL’s in-form striker.

This is great news as we could see Letsoalo partner Keagan Dolly, Percy Tau and Bongukuhle Hlongwane or Evidence Makgopa. This would be a red-hot and dangerous four-pronged attack.

For Bafana Bafana, the mission is clear – do not lose!

A draw or a win will be enough to see them progress to the next stage of World Cup Qualifiers.

READ | SAMIR NURKOVIC IS BACK IN NATURENA AFTER DRAMA IN COLUMBIA