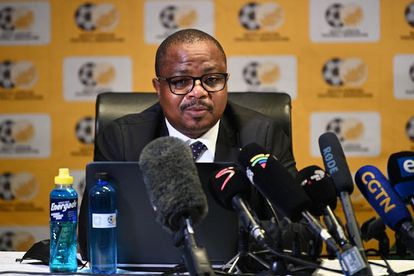 Bafana Bafana had their appeal against Senegalese referee Maguette N’Diaye dismissed because they did not pay settle their protest fee – this is how much SAFA were supposed to pay FIFA!

READ | BAFANA BAFANA AND SAFA RECIEVE SHOCKING LETTER FROM FIFA: ‘YOU DID NOT PAY ON TIME!”

According to TimesLive, SAFA were meant to pay R17 500 to FIFA within 24 hours of their match against Ghana.

They failed to make payment within this time. Resulting in their appeal being dubbed as inadmissible by FIFA.

READ | KAIZER CHIEFS SET THEIR SIGHTS ON FORMER PSL PLAYER OF THE YEAR!

This is clearly a double-edged sword for South Africans, SAFA and Bafana. On the one hand, the fee should have been paid sooner to give SA more chance of a successful appeal.

However, this is not a fee they should have paid in the first place. SAFA CEO Tebogo Motlanthe strongly stated that it was not a protest but rather an official complaint made against N’diaye.

Motlanthe is infuriated and SAFA is confused. They lodged an official complaint and followed the procedure around this.

Now, FIFA have come back and claimed that it was a protest. Adding more fuel to an already red-hot fire. R17 500 might not sound like a lot given the severity of the situation.

There is sure to be some criticism and backlash from the public but Motlanthe is adamant that no fee should have been paid in the first place.

SAFA settled the fee five days after their match against Ghana and FIFA accepted it leaving questions around the entire process.