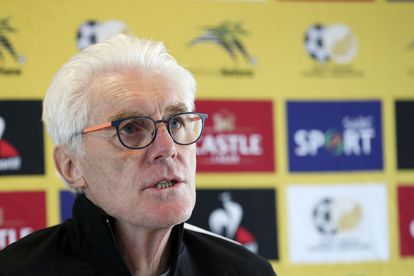 Bafana Bafana coach Hugo Broos will announce his final squad to take on Morocco in their first Africa Cup of Nations (AFCON) 2023 qualifier later on Thursday.

The South African side will travel to the Prince Moulay Abdellah Stadium in Rabat for the clash on Thursday, 9 June.

The all-important announcement will take place at 12:00 on Thursday, 26 May at SABC Radio Park and will be broadcast live on SABC 1.

South Africa have been drawn in Group K, which also includes Liberia.

Bafana Bafana’s hopes of qualifying for the 2023 AFCON tournament received a massive boost last week when the fourth team in the group, Zimbabwe, was suspended by FIFA and as a result won’t participate in the qualifiers.

The top two teams in each group will head to the tournament to be held in the Ivory Coast from 23 June to 23 July next year.

Last week, 70-year-old Belgian Broos announced his provisional squad of 38 players and after his final selections are revealed, the team will head into a camp to prepare.

According to the most recent FIFA rankings, Morocco are in 24th place in the world (and second in Africa), while Bafana Bafana are 69th (and 13th).

Liberia are a lowly 149th (and 46th) and really shouldn’t pose any threat whatsoever … !

How to deal with unruly behaviour among school children.

Stage 6 load shedding: Tips to cope during dark times ahead

July SASSA payment dates: Here’s when you can collect your grants

Springboks v Wales: 9 stats and facts to help you impress your mates!