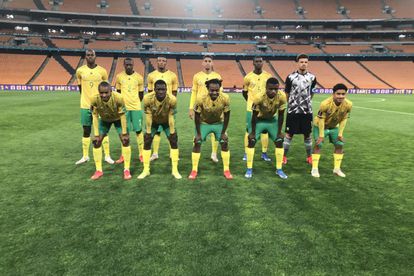 Bongokuhle Hlongwane’s solo goal proved to be enough but there was so much action that has sparked debate and evoked emotion in South African football fans around the country.

In the first half the Lion of Judah scored what should have been the opening goal. He was controversially ruled offside and the goal was cancelled.

Replays suggest that Tau was actually onside and that the goal should have stood. If Hlongwane had not scored the winner in the 83rd minute this decision could have cost them the game. This would have significantly dented their chance of qualifying for the next stage of Soccer World Cup qualifiers!

VAR will have to be looked at as soon as possible so that no team pays the costly price of a potential error made by any official.

Kaizer Chiefs star Blom made his much-anticipated debut when he came on in the second half.

He also ended a long run of no Soweto Giants playing for Bafana Bafana for over 2 and a half hours! After not one Chiefs or Orlando Pirates player played against Zimbabwe.

READ | END OF AN ERA FOR SOWETO GIANTS? NO KAIZER CHIEFS OR ORLANDO PIRATES PLAYERS PLAYED FOR BAFANA BAFANA AGAINST ZIMBABWE

This was the cherry on top of an excellent season for the Amakhosi player. A well-deserved debut after a very strong season that saw him play an instrumental role in Chiefs reaching their first-ever CAF Champions League final. He also put in a Man of the Match performance in Amakhosi’s victory over Orlando Pirates in the Carling Black Label Cup.

What a season by the youngster. Judging by his form in the first two games of this year’s PSL, he is looking more matured and even better than before.

Many gave the national side little to no chance of beating Ghana.

The Ghanaians were firm favourites especially after their 0-0 draw against Zimbabwe in Harare on Friday. However, The South Africans had different ideas as they took the game to The Black Stars and dominated possession and territory.

They outplayed Ghana in every facet of play and were deserved winners.