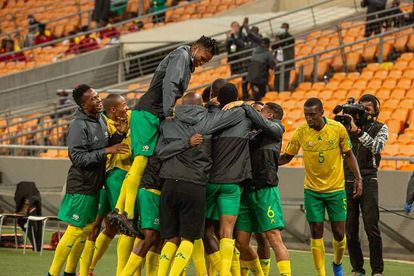 Bafana Bafana coach Hugo Broos has called for the implementation of VAR after a Percy Tau goal was incorrectly ruled out against Ghana. Photo: Twitter

Bafana Bafana coach Hugo Broos has called for the implementation of VAR after a Percy Tau goal was incorrectly ruled out against Ghana. Photo: Twitter

Bafana Bafana recorded a narrow 1-0 win over Ethiopia in a FIFA World Cup qualifying match which was played at FNB Stadium on Tuesday.

AS IT HAPPENED | BAFANA BAFANA 1-0 ETHIOPIA

Ethiopia captain Getaneh Kebede scored a first half own goal which proved to be enough for Bafana Bafana to win the match.

As a result, Bafana Bafana reclaimed their top spot in Group G as they sit on 10 points after four games, a point ahead of second-placed Ghana.

Hugo Broos made four changes to the Bafana Bafana team that beat Ethiopia 3-1 at Bahir Dar Stadium last Saturday as he kept the core of the team intact.

It took 10 minutes for Bafana Bafana to take the lead as Yusuf Maart’s corner found Victor Letsoalo inside the Ethiopia box.

Letsoalo’s attempted header was turned into the Ethiopia net by Kebede who was only trying to clear the ball away from danger.

Kebede then had two goalscoring chances in quick succession soon afterwards but he failed to put neither of the two chances into the back of the net.

Ronwen Williams came to Bafana Bafana’s rescue on both occasions as he first positioned himself well to make a fine save before diving to his right to make another brilliant block.

Bafana Bafana had a chance of their own to double their lead but Letsoalo, from a cross by Bongokuhle Hlongwane, skied his attempt from inside the box.

READ | RHULANI MOKWENA: I DID A LITTLE MORE AT ORLANDO PIRATES THAN AT MAMELODI SUNDOWNS

Ethiopia made a change before the interval with Amanuel Gebremichael making way for Abel Yarlew.

The visitors looked dangerous at the start of the second half as they took the game to Bafana Bafana in search of the equalizer.

Bafana Bafana came close doubling the lead midway through the second half when Evidence Makgopa put the ball around the goalkeeper.

However, the attempt lacked enough power and as a result, Hamid Suleman managed to clear the ball off the line.

The last real chance by Ethiopia came in the latter stages of the game as Yarlew volleyed his attempt wide, much to the relief of the Bafana Bafana bench.

Ultimately, Bafana Bafana stood firm and defended as a unit to see off Ethiopia and keep their hopes of qualifying for the World Cup alive.

Ride along on a lap of the Kyalami circuit