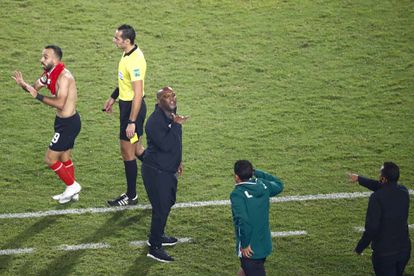 Mosimane has endured his fair share of criticism at Al Ahly this season with a number of former players and Egyptian legends taking aim at the former Mamelodi Sundowns mentor.

A difficult two weeks for Pitso Mosimane which saw rivals Zamalek climb above Al Ahly on the log standings after dropping points twice in their previous three games has many Egyptians calling for his head.

“Al Ahly management secures everything for Mosimane, he is in heaven,” Abdel-Aal said regarding Pitso Mosimane as quoted by KingFut.

“If he coached a second division team he would leave after one game. Mosimane cannot manage in the second division. He is a head coach with very limited abilities,”

“You can’t focus on that” ” Pitso Mosimane told SAFJA during an online press conference.

“If you want to coach Al Ahly‚ and want to coach Sundowns‚ do you worry about the former player who’s been asked‚ ‘Do you think the guy is doing well‚ will they make it‚ do you think he’s selecting the right squad?’

“Former players have got what they have to say and we always have to respect their contributions in football. Some speak well. I mean Mido came out‚ he spoke so well. Wael Gomaa came from Qatar, he came to me‚ ‘Pitso Mosimane oh unbelievable’.

The former Mamelodi Sundowns mentor Pitso Mosimane will undoubtedly thrive under the pressure he’s under however the door in Egypt to openly lashing out at Jingles seems to be unfairly wide open at the moment.