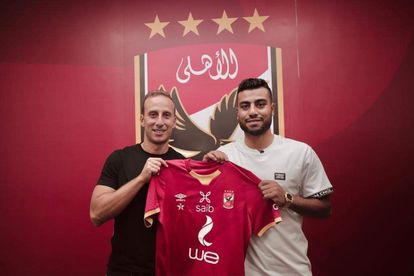 The reigning CAF Champions League holders have bolstered their attack with the signing of Hossam Hassan from fellow Egyptian outfit Smouha.

The 27-year-old is Smouha’s all-time leading scorer with 49 goals in 154 matches.

Hassan scored nine goals in 15 matches in the recently concluded Egyptian Premier League season before he was loaned to Libyan outfit Al Ahly Tripoli on a six-month deal.

The club have confirmed Hassam has put pen to paper on a five-year deal.

“Amir Tawfik, Al Ahly’s Director of Marketing and Transfers, announced that Hossam Hassan, our new striker, has joined Al Ahly for the next five years from Egypt’s Smouha,” the club announced their website.

Hassam joins Tau and Miquissone who were unveiled by the club on Thursday.

Both Tau and Miquissone were previously at Mamelodi Sundowns under the guidance of now Al Ahly coach, Pitso Mosimane.